One of our core values at DMD is passion, as expressed in our fierce commitment to our clients, partners, co-workers, families, and the world around us. This value aligns closely with another: corporate stewardship within the community. We recognize the great needs in the community around us through our personal service and corporate contributions.

Allen Annett, our Chief Human Resources Officer, is the manifestation of both passion and corporate stewardship

I recently visited with Allen to better understand the depth of charitable work he’s been engaged in over many years. What I didn’t know at the start of our conversation was just how moved I would be listening to his stories.

Sarah Brown: Allen, you’ve been doing charitable work for so many years, which of course is one of the values we as a company encourage in all our team members. But as I understand it, your charitable activities are really your own personal pursuits, correct? They’re not directly related to DMD.

Allen Annett: Correct, but the important point is that DMD supports them. Not just with donations, but allowing me to take the time to serve. And people within the company have personally donated as well, after learning about the work I’m doing.

Sarah: How did you get started with the charitable work you’ve participated in?

Allen: You know, people in human resources, we tend to expand our concern about others by doing things outside the company as well. For me, it’s more of a natural thing. I don’t feel I’m doing something that no one else can do. But I do think back to my childhood. I came from a low-income family, and there was this summer camp I wanted to attend. I didn’t know it at the time, but a sponsor paid for me to go to the camp. It was only a few months ago that I discovered that a total stranger was kind enough to pay my registration and camp fee. “Wow. Somebody put that out for me, for someone they had never even met.” After all these years, 50 years, it’s still about giving—giving back, if you can.

Sarah: I know you and Roger Korman [past DMD President] are good friends and have been colleagues for decades. He is also involved in a number of charitable groups. Did you ever work together on any projects?

Allen: Actually, yes. Some of our volunteer and community work began when we worked together at IMS beginning in 1987. It was called the Aurora Project. This was a project sponsored by the YMCA located in my neighborhood, working with women who hadn’t completed high school. The program was developed to prepare women who had never been in the workforce, or were wanting to return, to be able to secure a job. Roger had IMS donate a few used desktop computers and a sum of money while I, working with YMCA employees and other volunteers,  taught the women how to write resumes and prepare for job interviews. It was such a warm feeling to see these individuals, many of them a bit shy or uncomfortable at the start, blossom over just a few weeks.

Sarah: Tell me about your work in Asia. You were in Singapore for a while, yes?

Allen: Right. The company I worked for in Singapore was sponsoring a small, local organization that worked with intellectually challenged teenagers and young adults. It was through this organization that I met Sister Marguerite, a Catholic nun of Cambodian descent.

Sarah: She has a pretty incredible story, from what I hear.

Allen: She survived the Khmer Rouge, the Pol Pot regime. Lost her parents and siblings. She was eventually rescued by a group of Canadian nuns from Quebec, attended school in Canada, and then on to France to get her degree before returning to Cambodia.

Sarah: What was the work you did with Sister Marguerite?

Allen: When I was first talking with her, she asked me what my hobbies were. I told her I like to make jams and preserves. She replied, “We have a culinary school.” Prior to going to Cambodia, I had spent some time researching how to use the local fruit to make jams. So, during my time there, I taught a group of teenagers, mostly boys, how to make preserves using local fruit. A number of them hoped to open up little shops or sell goods from carts in the street. Listening to their stories and dreams of how they planned to use their culinary skills to one day be the proprietor of their own cafe, sweet shop, or food cart made me feel very thankful and honored to have been invited to do my part in helping them work towards their goals. It was a very rewarding feeling for me.

Sarah: You met another nun as well, Sister Rachelle. Tell me a bit about your work with her.

Allen: Meeting Sister Rachelle was completely by chance. I was scuba diving in the central Philippines and on my return flight home to Singapore I helped put her bag in the overhead

compartment. We got to talking, and she told me her story of wanting to get away from her vocational teaching work in Italy; that her life was “too good” in Italy. She asked the bishop to send her somewhere where she could make a difference, so she was basically dropped off in the middle of the Philippines. She didn’t speak the language and knew very little about the country or culture. She told me she attended Mass one Sunday and after the service when a few people offered her money, she refused because she didn’t know they were offering her donations. “I told myself to not let that happen again,” she said. “So I’d better quickly learn to speak the local Tagalog dialect.” Over the years she bought land, built a convent, taught street children, children whose families couldn’t afford to send their kids to school, and built a medical center. But it was when she showed me the shell of a planned school building that I really got hooked.

They had run out of money to complete the school, it hadn’t been worked on in a few years and was going to fall apart if something wasn’t done soon. “I’m going to help you build your school,” I said. And I did. I received donations of money from a few friends. I brought supplies; pencils, pens, backpacks, erasers, and chocolate, a favorite treat few children there could afford.

You can just be a positive light in someone’s life.

I began to provide support to Sister Rachelle in 2015, she was teaching 24 children at that time in makeshift classrooms. Today there are 167 kids in the almost completed school building, thanks in part to DMD’s donations. Once we finish the second floor, hopefully this year, we’ll accommodate 230 children from kindergarten through grade six. With these kids, it’s about more than “going to school.” They’re learning how to be leaders in their own right. They see what’s happening around them, and they have an appreciation, even as kids, of how they can share and help one another. Even though it’s a school for the underprivileged, for orphans, the governor’s daughter attends the school. He told Sister Rachelle he wants his daughter to have a strong moral education.

Sarah: That’s really phenomenal, Allen. Did you do additional work in that area? In the Philippines?

Allen: My first volunteer project in Asia supported by DMD was working with a small NGO in the southern Philippines, which has a higher level of poverty than the rest of the country. With support from the local government, we built a quail farm. We wanted to help communities nestled 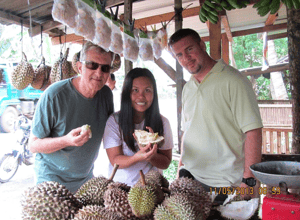 in the mountains where there was a lack of roads, electricity, and running water. DMD donated 75% of the money needed to buy a rugged four-wheel vehicle. This allowed us to transport more than a thousand quail eggs weekly to remote hamlets and villages. The quail eggs were distributed to 50-plus women who sold them throughout the local villages, providing them with much needed money to support their families.

Sarah: For people who maybe can’t do the kind of charity work you’re doing—perhaps they don’t have the resources, the time. What’s your advice to them?

Allen: It doesn’t have to be building a school, or helping to sustain a village. It can be as simple as going into your workplace saying, “Good morning,” to people or just smiling. You don’t know what their day is like, or how their night has been. If you see someone frazzled or in a rush, let them go ahead of you in line. You don’t have to do what I do to be of help to others. You can just be a positive light in someone's life. You know, when I asked Sister Rachelle how she was able to do all that she did, over all the years that she has dedicated to serve, how she built the things she built, got the land and now, building houses for families living on the street, she simply said, “Slowly, slowly.” Those words have been ringing in my head ever since I first heard them five years ago. Each of us can do good deeds over time; it’s what you do that matters, not the size of the deed.  I’m thankful and feel lucky to be able to do the volunteer work I do and work for a company that supports it. DMD is a company that demonstrates and lives its corporate values.

DMD, an IQVIA business, offers the only authenticated database available that can reach, report, and respond to the dynamic digital behavior of fully opted-in physicians and NP/PA prescribers. Through this database, pharmaceutical marketers, hospitals and health systems, medical societies, publishers, medical marketing agencies, and others have digital access to more than 90% of physicians with email addresses and real-time web activity data that unlocks precision targeting and engagement capabilities across the most influential healthcare audiences.

[2021 Update] To Send Or Not: Email Open Rate Trends During The Holidays

The Art of Rep-Triggered Email Campaigns