Physician Email Lists: Why Use One-Dimensional Data When 3D Exists?

In the 1990s, a 3D craze took hold in part thanks to Magic Eye® 3D images. If you’ll recall, these images are designed so that viewers unveil three-dimensional illustrations by strategically focusing on two-dimensional patterns. While some people have a difficult time picking out the hidden figure, others can clearly focus and it is revealed—magically.

Creating a robust “3D physician profile” can’t be left to magic. What makes the difference between a fully fleshed-out physician depiction and a flat representation? The right email list.

Email lists vary in quality, but the range of inferiority to superiority isn’t always reflected accurately. List providers often overpromise and underdeliver, providing either inaccurate data or too simplistic of a physician portrait. Both scenarios put you at risk for estranged relationships with your physician base, with fallout ranging from failed deliverability and spam traps to irrelevant, annoying content.

Given the following, which database “dimension” would you rather enlist?

1D: Synonyms of one-dimensional include “superficial,” “flimsy,” and “depthless.” A physician email list of this caliber can be likened to one that’s been scraped via illegitimate (or illegal) means, which further sums up its quality in one last synonym: sketchy.

2D: While two-dimensional figures appear to have length and breadth, they still contain no depth. Webster defines this concept as “lacking substance; limited in scope or range.” A 2D physician database may contain a doc’s email address that can realistically be attached to that doc but does not provide multiple email addresses, nor does it identify her preferred email address. These lists are typically limited to very bare bones data, such as first name, last name, and a singular (often manufactured) email address.

Another definition is “having lifelike quality.” When you’re working with physician-level data, you are able to compose relevant messaging that is physician-specific. Your targets become human individuals, not just one entry in an index of hundreds.

Understanding the sum of individual physicians’ parts is the basis from which you can create precise email campaigns, regardless of your communication intention.

If your goal is to boost referrals to certain service lines, use medical specialty and diagnostic data to segment docs most effectively and efficiently. For example, to promote advancements in your neuroscience department, you’d construct unique messaging for psychiatrists, neuropsychologists, neurologists, speech pathologists, geriatricians, primary care physicians, etc.—both in-system and out-of-network.

Internal communications can be articulated per department, but also compartmentalized even further to address core groups within departments.

In all cases, the underlying advantage is the ability to form true, meaningful connections with those physicians who can make the biggest contribution to your health system’s success. But, without a 3D-quality database, those connections are lost. Don’t be the marketer who can’t recognize the beauty of the 3D image and only sees 2D patterns—or worse, ignores altogether the value of the “whole picture.” 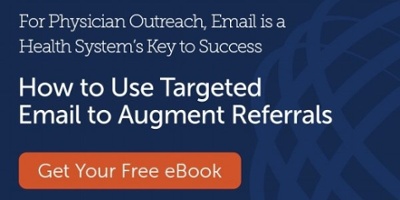