All Hands On Deck: Address Internal Mishaps With Targeted Email

A world that’s increasingly dependent on technology cannot exist without glitch. Remember when a scheduling snafu gave all American Airlines pilots Christmas day off? Or the Apple software issue that repeatedly rebooted certain iPhones for no apparent reason? Just last week, JPMorgan suffered through a nearly three-hour window of clients seeing a different customer's account after signing in.

Let’s not forget the administrative-based delivery debacle that forced over 600 Kentucky Fried Chicken stores to temporarily close in the UK and Ireland, resulting in widespread panic.

Hospitals have their fair share of mishaps, too, whether tech-based or human error. It’s simply inevitable when running a massive health system with multiple subdivisions and care units.

Some glitches are quick fixes. Others take more extensive finessing to bring both customers and staff back around.  Chicken lovers will likely forgive KFC rather quickly, especially in light of the company’s sheepish (yet silly) tweet: “The chicken crossed the road, just not to our restaurants.”

Overcoming something like a medical device failure, however, presents a more complicated challenge than Twitter can mend. Much like ER personnel, health system administrators have to find a way to first triage the situation, then work on implementing a permanent solution.

Some errors are out of human control. A medical device that malfunctions due to design failure is no fault of the physician using it, but the fallout still rests on the hospital’s shoulders. A breakdown in care because information is unrecorded, misdirected, or ignored may be attributed to a combination of tech and human blunder.

Regardless of cause, the aftermath must be addressed—and quickly. Email is the most effective method for righting the ship.

Email is the most effective method for righting the ship.

All Hands on Deck

Doctors prefer email as their primary point of communication, so it makes sense to utilize it to its full potential. Instead of employing it to scold and point fingers, the message should be one of unity. Whether flaws are department-specific or exist across the entire health system, email is a powerful tool to engage and support all personnel in improving and uplifting problem areas.

If lack of accountability is the culprit, an email program that encourages medical teams to achieve internal goals, and subsequently celebrates successes, can be highly reformative. Because email is so simple (and cost effective) to deploy, accomplishments—even small victories—are able to be disseminated in real time.

In a defective device scenario, email has the opportunity to be informative, educational and empowering. An explanation of why the device failed—as well as instruction on how to speak to inquiring, concerned patients—exhibits the type of high-value content that physicians need and appreciate. Enlisting a comprehensive physician email list provides the ability to target physicians with unique messaging based on their specialty and use of the device.

In both cases, you’re demonstrating a dedication to help all parties—physicians, nurses, and clerical staff—do their jobs better.

Of course, the underlying prudence in ensuring email not only performs its intended duty but prevails is that you are working with a database that encompasses those physician-specific details. Internal staff lists are often fraught with discrepancies. To complete your responsibility as “captain” of the ship, it’s imperative to invest in a list that has been authenticated, third-party verified, and includes only 100 percent double opted-in addresses.

As we look towards the U.S. News & World Report rankings, now just a few months away from being revealed, it’s especially important to consider email’s benefit in addressing potential low scores. An injurious ranking due to complications like the above does not signify a sinking vessel. Rather, it should incite a rallying cry for action. 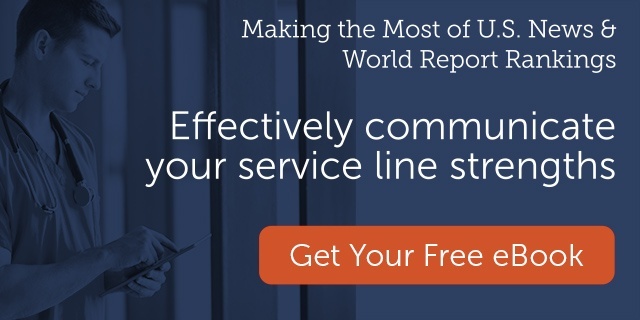